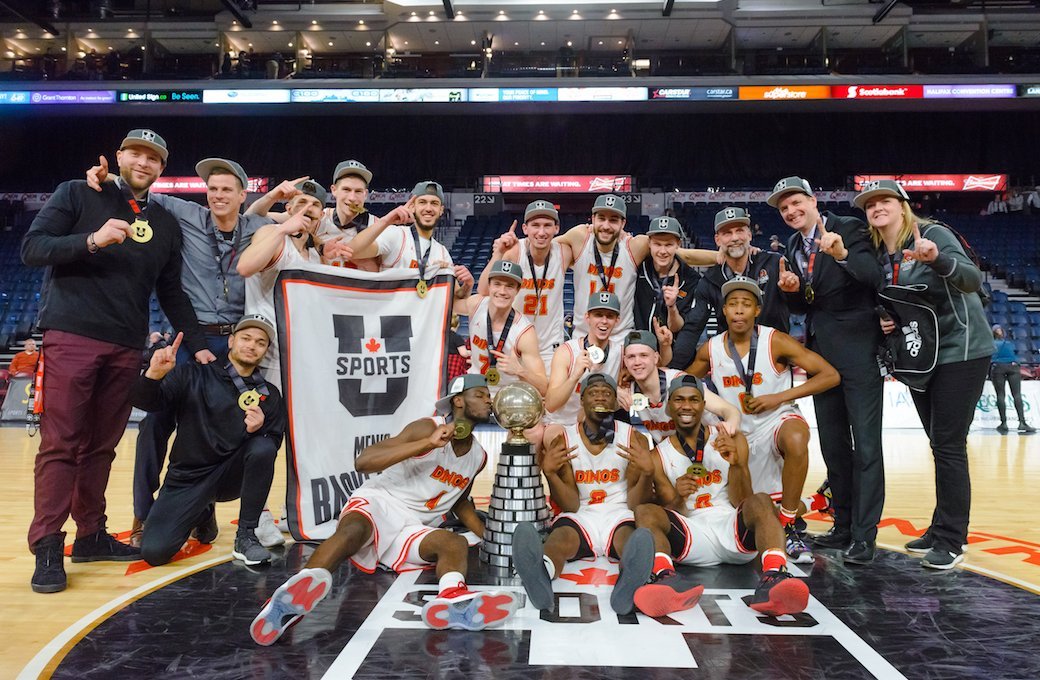 CALGARY, Alberta — For the first time in their history, the Calgary Dinos men’s basketball team will enter the new campaign as the defending national champions.

The Dinos won their second Canada West title in the past three seasons in 2017-18, punching their ticket to the U Sports Final 8 tournament in the process. From there, they would rattle off three wins over a four-day span to take home the 2018 U Sports National Championship.

Calgary also won the Canada West crown back in 2015-16 and advanced to the national championship tournament. The Dinos would push their way to the title game, but fell to the Carleton Ravens when all was said and done.

In each of the last three seasons, Calgary has advanced to the Final 8 tournament. They have two championship game appearances over that span, and they were crowned the Consolation Champions in 2016-17.

In 2018-19, the Dinos will look to make it four-straight trips to the Final 8 tournament. With the bulk of their production back for another season, Calgary has their sights set on a second-straight national championship.

From the beginning of the 2017-18 season, the Dinos were one of the nation’s top teams. They went 3-0 in the Calgary Classic event on their home floor, and then went 2-1 in St. Catharines at a preseason event hosted by the Brock Badgers. Their preseason record was a good indication of what was to come for the program over the course of the regular season.

When the year was over, the Dinos put together a record of 29-5 overall, including a 16-4 record against Canada West opponents. They were an impressive 15-1 inside Jack Simpson Gymnasium, and they put together a perfect 5-0 record in neutral court games.

During their impressive regular season, Calgary also swept the two games in the Crowchild Classic against their in-town rivals, the Mount Royal Cougars.

Offensively, the Dinos were a handful each and every night. Their offense went for 80+ points on 24 occasions during the season. As a team, Calgary averaged 87.0 points per game on offense, while holding opponents to just 72.5 points per game, a differential of +14.5. When you can outscore your opponents by double-digits, you must be doing something right.

Entering the 2018-19 season, head coach Dan Vanhooren and his staff have to like the looks of the Dinos’ roster. Their top five scorers from last season are listed on the team’s website for the upcoming season, and that’s bad news for the other teams in the Canada West Conference and teams across the country.

Leading the way will be fifth-year guard Mambi Diawara (Montreal, PQ), who was the hero in last season’s national championship game against Ryerson. With four seconds left, the Dinos called a timeout and drew up a play. Diawara commanded the ball, and he got his wish. When all was said and done, Diawara and the rest of the Dinos celebrated with a 79-77 win over the Rams in regulation.

In 28 games, Diawara led Calgary in scoring and rebounding, averaging 20.6 points and 7.3 rebounds per contest. He also dished out 3.5 assists per game, which was good for the second-highest mark on the team at year’s end. For his efforts, Diawara was named a Second Team All-Canadian ahead of the 2018 U Sports National Championship tournament.

It marked the fourth year in a row that the Dinos had an All-Canadian on their roster.

Joining Diawara back in Calgary this season are fellow fifth-year guards David Kapinga (Calgary, Alta) and Lucas Mannes (Chilliwack, B.C.). Mannes was one of four players to average double-digit points per game last season, finishing the year with an average of 10.0 points and 3.8 rebounds per contest.

Kapinga put up strong numbers over the course of the year, finishing with an average of 14.3 points, 3.9 rebounds, and 4.1 assists per contest. However, the former walk-on kicked things into another gear in the playoffs to help propel the Dinos to the national title.

Over the team’s eight playoff games, Kapinga averaged better than 20 points per contest. He led the team in scoring four times over the eight-game stretch, and he saved his best performances for the title games. Against the Alberta Golden Bears in the Canada West tournament finale, he went for a career-best 32 points. Then, against Ryerson in the national final, Kapinga posted 25 points in the win over the Rams.

Up front, fifth-year forward Lars Schlueter (Ulm, GER) is back to anchor the front-court rotation. He averaged 10.3 points and 4.5 rebounds per game last season, while shooting 42.7% from the floor. The 6’8” forward showed the ability to stretch the floor with his shooting ability, hitting on 34.1% of his attempts from beyond the arc.

Schlueter is one of two players from Ulm, Germany on the roster for the Dinos in 2018-19 (Max Eisele).

As if the core of the team wasn’t strong enough, the Dinos add a former conference all-star to the mix for the upcoming season. To make things more interesting, he comes from the Dinos’ rival from down Crowchild Trail. Brett Layton transferred to the University of Calgary for law school, and will suit up for the Dinos this season as a transfer.

Calgary has already posted some impressive results over the summer in exhibition play. They went 3-2 on their five-game trip to Costa Rica against Division I opponents from the NCAA. They posted a pair of wins over the UTSA Roadrunners and one against the Maine Black Bears over their five games, with losses to Maine and the San Diego Toreros book-ending their trip.

The Dinos also took a trip to Germany to visit the hometown of Schlueter and Eisele, while also taking part in four exhibition games. The team went 0-4 against various teams from around Germany, but the experience alone makes the trip a win for the team.

You’d be hard-pressed to find a more experienced roster than that of the Dinos heading into the upcoming season. They have a healthy mix of talent and experience, and experience goes a long way in collegiate basketball.

With the core still intact from last year’s national championship team, the Calgary Dinos are the team to beat this season, both in Canada West play and on the national scene.

The Dinos kick off Canada West play on October 26th and 27th with a pair of home games against the visiting Regina Cougars. They will play four exhibition games leading up to that, beginning with three games on the East Coast in Nova Scotia.