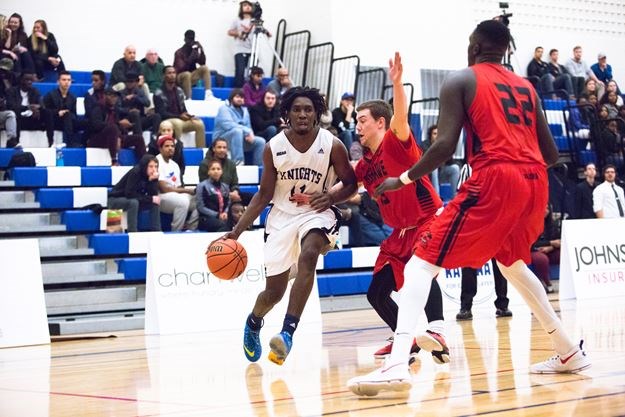 This past week, fans were treated to an early Game of the Year candidate when the top-ranked Sheridan Bruins were on the road to take on the Redeemer Royals in Ancaster, ON. In front of a rowdy home crowd, the Royals threw everything they had at the Bruins and their high-octane offense, taking a double-digit lead into the break only to sweat things out right to the final buzzer.

The fourth quarter itself saw 14 lead changes and five ties before the Royals would come away with the 112-109 victory over the Bruins, handing Sheridan its first loss of the season.

Overall, the week provided a high level of excitement across the entire OCAA. We saw some impressive individual performances as well as a shakeup in the standings from top to bottom. Anything can happen on any given night in college basketball, and that was on full display throughout the week.

Here are five players who stood out among the rest in this week’s Starting Five.

They may have only played one game over the past week, but the Redeemer Royals made the most of their opportunity. On their home floor, they welcomed the top-ranked team in the CCAA to town as the Sheridan Bruins looked to keep their winning ways going. The Royals had the tall order of containing the Bruins’ high octane offense while trying to put up points themselves to keep pace. Spencer Kerssies and company were up to the task, and the home crowd gave them the extra boost they needed.

In front of a raucous crowd, the Royals stunned the Bruins by handing them their first loss of the season, 112-109. The fourth quarter featured 14 lead changes and five ties, but the home side came away on top when all was said and done. Kerssies posted a double-double on the night, recording 27 points and 15 rebounds to help guide Redeemer to the upset victory. He added three assists, two steals and one blocked shot in for good measure.

First year guard Kevin Otoo has had a strong start to his collegiate career with the Humber Hawks, and he’s been a key cog in their 4-0 start to the season. This past week, Otoo continued his strong play as the Hawks picked up another two wins, one each coming at home and on the road. They played spoiler on the road against Niagara, while they held down home court in an offense-filled contest with the Lambton Lions.

The Hawks were on the road to take on Niagara in the Knights’ annual Blue & White game. Otoo went for 20 points, four rebounds, and two assists to help guide the Hawks to the 94-81 victory. From there, they returned home to take on the Lions, and while the game was much closer, the result was still the same. Otoo went for 14 points and six rebounds to help guide the Hawks to the 102-96 win.

For the season, Otoo is averaging 15.5 points and 5.3 rebounds per game while shooting 54.5% from the field.

The Loyalist Lancers opened the 2018-19 season with three straight games on the road to end the month of October, in which they went 1-2. In November, the Lancers have a five-game home stand before closing the month with one road game. This past week saw Loyalist open up their home stand with games against the Algonquin Thunder and La Cite Coyotes, and Raymond Yeung ensured that they started things on the right foot.

Yeung was a force on both ends of the floor over the two games, guiding the Lancers to a pair of wins to push their record to 3-2 for the year. In their 73-64 win over the Thunder, Yeung went for 18 points, six rebounds, two assists, and six steals. Then, against the Coyotes, Yeung posted a similar stat line in the Lancers’ 106-84 victory. He recorded 20 points, four rebounds, four assists, and racked up another six steals for a strong two-way performance.

What a start to the season its been for the Centennial Colts. They entered the week as the #14 team in the country in the first edition of the CCAA Top 15 rankings, thanks in large part to their upset win over the Seneca Sting the week prior. They may have only had one game this week, and it was their first game away from home, but guard Isaiah Cromwell-Wright made sure that the Colts came away victorious on the night.

The Colts were on the road to take on the Durham Lords in Oshawa, ON. The Lords led by five at half-time, but the Colts would use a second half comeback to propel them to the 81-75 win. Centennial outscored Durham by eight points in the fourth quarter to complete the comeback and push their record to 3-0. Cromwell-Wright led the way for the Colts with 27 points, two rebounds, and four assists. The first-year guard from Halifax, NS is averaging 22.0 points per game this season.

Across their two games this week, the Niagara College Knights earned a split, pushing their record to 3-1 on the season. They hosted their annual Blue & White game to open the week before heading on the road to Hamilton, ON to close out the week. Fourth year guard Van Hutchinson Jr. continued his strong play to start the season by averaging a double-double over the week to lead the way for the Knights.

In the Blue & White game, the Knights played host to the Humber Hawks. Niagara would fall in front of their home crowd for their first loss of the season, 94-81. Hutchinson Jr. went for 23 points, 12 rebounds, five assists, and three steals for a strong performance all-around. Up next, the Knights were on the road for a date with the Mohawk Mountaineers. Niagara found their groove on offense, topping the 100-point mark for the second time this year in their 105- 90 win. Hutchinson Jr. narrowly missed another double-double, recording 11 points, eight rebounds, three assists, and two steals in the win.