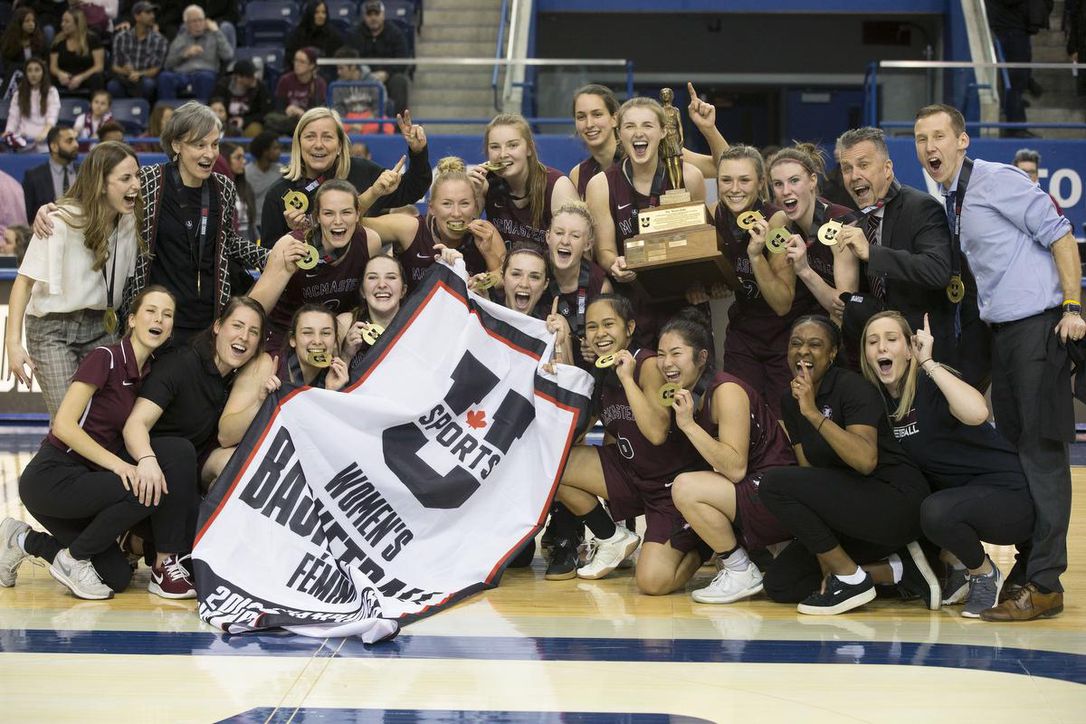 HAMILTON, Ont. — If you’re reading this, it’s not too late.

The 2019-20 basketball season is right around the corner, and we’re here to help you get set for what will surely be an incredible journey.

While we’re still looking back on an incredible 2018-19 season, one that saw two teams win their first-ever National Championships in school history, it’s also the perfect time to look ahead. The 2019-20 season promises to deliver a heightened level of excitement, and we can’t wait to see what’s in store for the new campaign.

To get fans across the country ready for the new season, we’ve taken on a challenge that hasn’t been done before. In the coming weeks, we will preview every team from coast to coast ahead of the 2019-20 season.

From August 8th through to October 6th, every team will be previewed in some capacity. For institutions that have both men’s and women’s basketball, a separate preview piece will be done for each team.

Rosters will be dissected and a look back at the year that was will help us determine what the team looks like this time around as every team begins with a blank slate in the standings.

Without further adieu, here is today’s preview on the defending U Sports Women’s Basketball National Champions, the McMaster Marauders.

The 2018-19 season was truly a Banner Season for the Marauders in the OUA.

At year’s end, McMaster had two significant banners to their name for their efforts over the course of the year. First, they got things started by winning the Critelli Cup with a thrilling 79-75 win over the Ottawa Gee-Gees in a Championship game that saw the top-ranked team from both divisions in the OUA square off.

From there, the Marauders carried their momentum into the U Sports Women’s Basketball National Championships. As one of the top teams in the country all season long, the Marauders had their sights set on their first national championship.

An 86-68 win over the Concordia Stingers in their quarterfinal contest sent them onto the Championship side of the bracket, and they continued to build momentum from there. In the semi-finals, the Marauders got past a tough Saskatchewan Huskies team, 73-66, to punch their ticket to the National Championship game.

Waiting for the Marauders was the top-ranked team in the country, the Laval Rouge et Or.

The teams were tied heading into the fourth and final quarter, and the Marauders made sure they were the ones that came out on top. When the final buzzer sounded, the Marauders were the 2019 U Sports Women’s Basketball National Champions after a 70-58 win over the Rouge et Or.

McMaster had their share of veterans on their roster last season, and their presence and leadership helped guide the Marauders over the course of the year and ultimately to the national championship. During the regular season, the Marauders posted a 21-3 record to secure first place in the West Division. They closed out the regular season schedule with seven straight wins, and they carried that momentum through the post-season and ended things on top.

Now, with several key veterans gone from last year’s championship team, it’s time for new faces to make their ascent to stardom in the OUA with the goal of defending the Marauders’ championship.

It’s no secret that veteran experience and leadership were two keys to the Marauders’ success last season. Now, the 2019-20 season marks the beginning of a new chapter for the program after three of their key players from last year have graduated and moved on to the next chapter in their respective journeys through life.

The group of Hilary Hanaka (Hamilton, Ont.), Erin Burns (Hamilton, Ont.), and Linnaea Harper have left a lasting impact on the Marauders program. Their names will never be forgotten when talking about women’s basketball at McMaster, given what they were able to accomplish in their final season.

Burns saw the least action of the three graduating players, but that doesn’t take away from her impact on the team. The hometown guard made six starts over the course of the regular season, five of which came in a row to start the 2018-19 season. She averaged 5.6 points and 4.0 rebounds per game while providing a ton of experience and leadership to the team both on and off the court, all of which you won’t find on any box scores.

Harper was one of the Marauders’ do-it-all guards. The Newmarket, Ontario native finished third on the team in scoring, averaging 14.0 points per contest. She was also the team’s top rebounder, pulling down an average of 8.2 rebounds per night out in the regular season. She shot 40.3% from the field, and a stellar 87.5% from the free throw line.

At Nationals, Harper capped off her McMaster career with Tournament MVP honours to go along with the Championship. Harper averaged 15.3 points per game over the three contests, despite being held without a point in the first half against Concordia. She recorded a double-double in the semi-finals against Saskatchewan (14 points, 10 rebounds), and narrowly missed a second in the finals against Laval (18 points, nine rebounds).

Rounding out the trio of graduates for the Marauders is hometown guard Hilary Hanaka (Hamilton, Ont.). Growing up in Hamilton and playing her high school basketball at St. Mary’s Catholic Secondary School, Hanaka capped off her basketball career in Steel Town by winning a National Championship.

Hanaka ranked second on McMaster last season in scoring, averaging 14.6 points per contest. Like Harper, she was a do-it-all guard for the team, having a strong impact on both ends of the floor with each passing game. In addition to her 14.6 points, Hanaka posted 3.0 rebounds, 3.9 assists, and 1.8 steals per game. On offense, Hanaka was a threat to score at all three levels, and she shot 46.0% from the field, 41.0% from beyond the arc, and 81.0% from the free throw line.

While the Marauders have lost their share of talent from last year’s team, they also return a fair bit of production, and they have some players who will step into new roles with the team and that could see them post some impressive numbers.

Arguably the biggest name returning for McMaster in 2019-20 is Sarah Gates. The Newmarket, Ontario native finished second in the OUA in scoring last season, flying under the radar with her 17.1 point per game average. Gates trailed only Leashja Grant (Nassau. Bahamas) of the Lakehead Thunderwolves for the OUA scoring title (20.6 ppg).

In November, Gates had her offensive talents on full display in a three-game stretch against some stiff competition. Against the Nipissing Lakers, Laurentian Voyageurs, and Ryerson Rams in succession, Gates recorded 24 points in each game. They made up three of her 18 contests with double-digit points during the regular season. As the season progressed, Gates was a consistent presence on the offensive end of the floor, shooting 44.5% from the field and 31.4% from three-point range.

Fast forward to March, and Gates wasn’t fazed by the bright lights and the big stage at Nationals. In McMaster’s three contests, Gates recorded 32, 21, and 18 points over the three-game tournament to help the Marauders secure their first title.

While Gates will likely be the team’s main offensive weapon, Coach Burns and her staff return other key pieces to the puzzle that will take on bigger roles.

Forward Christina Buttenham (Hamilton, Ont.) is back for her fifth year of eligibility, giving the Marauders a big boost inside. The former Iowa Hawkeye posted an impressive stat line of 10.5 points, 6.3 rebounds, 2.4 assists, 2.7 steals, and 1.3 blocks per contest while shooting 34.8% from the field. Over her last three regular season games, Buttenham averaged 15.6 points per contest, as she had three consecutive games in double-figures to help build momentum heading into the playoffs.

Forward Olivia Wilson (Lion’s Head, Ont.) should see an expanded role on offense this season with the loss of Hanaka, Harper, and Burns. Wilson saw action in all 24 regular season games and was a regular in the starting lineup, making 23 starts on the year. Over the course of the season, Wilson posted three double-doubles while averaging 8.5 points and 5.7 rebounds per contest.

The pair of Buttenham and Wilson give the Marauders one of the better front-court tandems in the OUA in 2019-20.

In the back court, the likes of Julia Hanaka (Hamilton, Ont.), Mia Spadaforo (Hannon, Ont.), and Arianne Soriano (Mississauga, Ont.) will look to fill the voids left by the graduating class. In reserve roles, all three players saw the floor in at least 23 regular season games last season, with Hanaka being the only one to start a game.

Coach Burns expressed some excitement when discussing the returning group she has and the challenges that come with losing some top-tier talent.

“I expect the same work ethic and the same classy style of team to step on the court this season,” said Burns. “It will be fun to find new ways to score and defend with a changed lineup.”

“This year’s first year class will all play minutes right away,” added Burns, when asked about this year’s recruiting class. “They all have shown themselves to be “team first” players and will fit in well in our team culture.”

To say the least, Coach Burns is excited about what the 2019 recruiting class brings to the table.

The Marauders have three commitments for the 2019-20 season, each of whom bring their own talents and past experiences to the table. Two guards and one forward will bring their talents to Steel Town as a part of the Marauders.

Up front, 6’1” wing Pietra Kamstra (Whistler, B.C.) will give the Marauders scoring at all three levels. The wing has good ball control and is strong on the offensive end, giving the Marauders yet another talented presence inside.

In the back court, guards Jenna Button (Hamilton, Ont.) and Tori Rigas-DeDomenico (Niagara Falls, Ont.) will bring their talents to McMaster after strong high school careers. Button helped lead her high school, Dundas Valley, the OFSAA AA Championships, while Rigas-DeDomenico was awarded the Harold Biggar Memorial award as the top player in Niagara Falls in 2018.

All three players will see significant minutes from the start of the season, but time will tell how long it takes the trio to get acclimated to the game at the OUA level.

“Our Championship “moment” is still being celebrated, but there are new moments and a new season to focus on now,” concluded Burns. “Our team, and each individual member of our team, have new goals and new roles to play in this new upcoming season.”

The Marauders know what they accomplished last season, and are rightfully still celebrating their Championship ‘moment’. With that in mind, their focus has shifted to the upcoming 2019-20 season and what they need to accomplish this time around.

McMaster will be entering the season with a target on their backs, and every team in the OUA will give them their best shot this season as the defending National Champions. Despite losing three key cogs from last year’s team, the Marauders return several key contributors and bring in three talented first-year players, all of whom will do everything in their power to help the Marauders defend their title.

Be sure to bookmark our 2019-20 Season Previews page to keep up with the previews as they are released online.